What Do You Stand For? Character Building Card Game 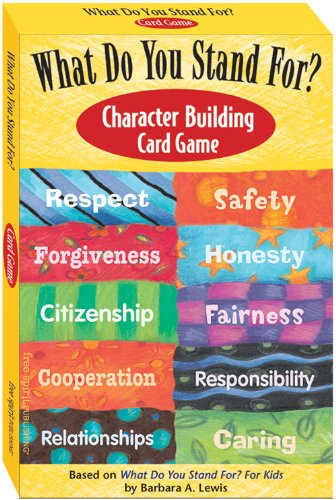 Turn learning into a game and kids will want to play. Based on What Do You Stand For? For Kids by Barbara A. Lewis, this card game spotlights ten top character traits: Caring, Citizenship, Cooperation, Fairness, Forgiveness, Honesty, Relationships, Respect, Responsibility, and Safety. To win, players collect cards of each trait. Each card features a "What If" scenario or question about character that gets kids thinking about what they would do-and what they stand for. Meant to be played with adult supervision (a teacher, counselor, or youth worker familiar with character education themes), the game includes an insert with rules and basic character education concepts.


A former public school teacher, Barbara A. Lewis has received many awards for excellence in writing, teaching, and leading youth in service projects and social action. She and her students have been honored for community contributions by President Clinton and featured in many national magazines and newspapers, The Congressional Record, and on national television. Barbara’s books include The Teen Guide to Global Action, What Do You Stand For? A Kid’s Guide to Building Character, The Kid’s Guide to Social Action, and Kids with Courage. Barbara is a sought-after speaker on topics including character development, service, and social action. She has lived in Indiana, New Jersey, Switzerland, Belgium, Utah, and Poland. Barbara and her husband, Larry, currently reside in Park City, Utah. They have four children and five grandchildren.